I’ve been getting numerous requests for an update on Book 2, The Dagger of Adendigaeth.  So here goes!

The manuscript is complete. Yes, truly.  It’s not quite as long as Cephrael’s Hand, but you’ll have lots of time with your favorites, plus an introduction to Kjieran van Stone, the truthreader sworn to King Gydryn who has been sent as a spy into the Prophet’s temple in Tambarre.  Oh the places you’ll go and the people you’ll meet…there is much in store for you in The Dagger of Adendigaeth!
Having actually finished writing the book, it’s now into the editing phase.  This process takes from two to three months, depending on how quickly my editors can read the novel and get me their notes.  Once this initial editing is finished, I’ll make any changes, and then we get a final copyedit done to get the manuscript press-ready.  Realistically, I’m still looking at about 4-5 months before The Dagger of Adendigaeth is ready for press.  However, I do have some teasers planned as we near publication, so subscribe to my blog to make sure you don’t miss any updates.
In the meantime, I’ve commissioned new artwork, including the book cover for The Dagger of Adendigaeth and several new (and highly upgraded) world maps. I’ve got a new book cover in the works for Cephrael’s Hand as well, since the series should have a coordinated artistic feel, and the cover for Book 2 isn’t in the same vein as what was done originally for Book 1. 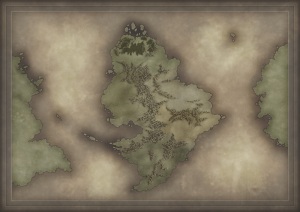 Cover issues aside, I thought you might be interested in seeing where the maps stand right now.  I’m working with the fabulous cartographer Ramah-Palmer, otherwise known as Andy.  Check out his page and you can join me in drooling over the other world maps he’s done.  Then take a look at what he’s working on for Alorin’s new map.  What I think makes Andy truly gifted is his ability to take all of the MANY disparate and sometimes completely impossible world-building descriptions I’ve already committed to in Book 1 and turn them into actuality.  To scale.  It’s astonishing, and I’m immensely grateful to have him!
We’re still in the mid stages with this overall Alorin map. None of the cities have been placed yet, and he’s just begun work on the forests, but I like where it’s heading.  Don’t you?

Would love to know what you think of it so far!