I know you’re all saying, “Melissa, it’s been a year already since The Sixth Strand released. Where the heck is book six?”

The answer is that I’m about 500 pages into the manuscript and feel like I’ve barely scratched the surface of this book. It’s not just a feeling. Those 500 pages represent most of Felix, a good beginning with Trell and Tanis, and a smattering of first chapters for others; but I haven’t even broken the surface on the majority of the work, especially considering how much needs to happen.

This book is a beast. I think I said the same thing about book five, right around the time when I told everyone there was going to be a book six. Needless to say, I’m feeling a little bit of pressure to get this book out of the gate and into that stage where it’s flying along and I can barely keep up. The fence is open, but the book remains rooted, despite my various goadings. It’s morphed itself from a thoroughbred into a bull into a surly and ill-tempered mastodon.

One of the reasons this book is slow going is the number of viewpoint characters that need a first chapter. I mentioned in my last update that first chapters are important and can take a while to get right. They set the scene, remind everyone where that character has been and what’s happened to them, and have to drive the plot forward into the story arc for that book, all while being entertaining.

Over the weekend, I got to feeling a bit incompetent and pathetic about my seeming lack of progress and decided to list out all of the viewpoint characters (I had been thinking there were around twenty-seven) and just see what I was dealing with. Sometimes it helps to get a visual representation of the massive story conglomerate that I mostly track in my head.

And when you put them all together on their various story threads, there were still fifteen separate plot threads to weave together into one cohesive story.  That’s like writing four normal books, all at the same time. In case this isn’t apparent, nobody in their right mind does this.

Here’s what all of this looked like when I was done: 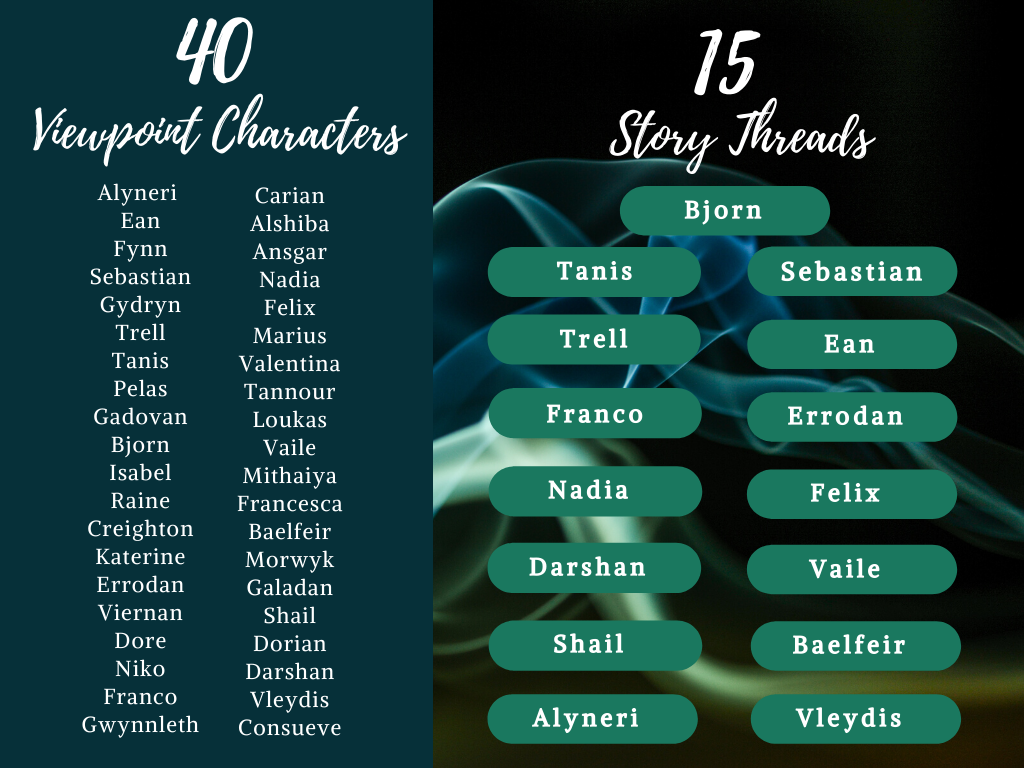 These are just the characters that I know about so far. The list doesn’t include characters who may yet make an entrance as more storylines get developed. And yes, it includes a couple of newbies, like Francesca da Mosta (who we met on Felix’s thread in book five) and Dorian Breckh (who we’ll meet on Nadia’s thread) as well as Gadovan Mandoril’s younger brother Galadan (the heretofore unnamed Paladin Knight who carried Niko van Amstel back from T’khendar to Illume Belliel after Franco Rohre decked him).

As many viewpoint characters as I have now, if I just wrote one chapter to reintroduce everyone, I would be be fifteen chapters into the book but only one chapter into the story. I have no idea how I’m going to solve that.

Lately I’ve been following the advice of my fellow Southern belle, Scarlett O’hara, who declared, “Oh…I can’t think about this now. I’ll go crazy if I do! I’ll think about it tomorrow,” and I’m just trying to write one chapter at a time.

Lest my personal sob story dishearten you, please rest assured I am devotedly writing book six and doing little else, much to the dismay of my waistline. This book is my priority, and with each chapter completed, that’s another rope around that mastodon. Eventually I’ll drag him out of the gate, and we’ll finally be off and starting to generate some momentum.

I’ll keep you updated as I have more news (like…any idea where this book is heading, for instance, or when it might make its way into your hands). As always, my deepest gratitude to all of you for reading.