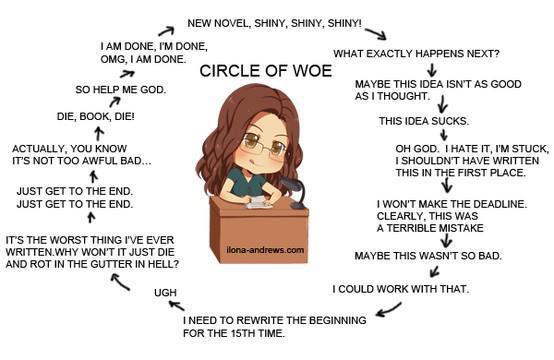 A reader recently wrote to me and asked, how do you write a novel when every time you start (oh, so many times!) you get a few chapters in and suddenly become deluged with doubts? And how, when you’re so well-read in the genre that you’ve read it all and seen it all a hundred times…how can you possibly devise a story that’s not cliché?

Though asked of me in regards the writing of fantasy, these questions are ones every writer struggles with—because every writer is possessed of the same demons. These parasites of our insecurities don’t all whisper the same demoralizing words, but they all originate in the same hateful level of hell. Their entire purpose is to keep writers (and all artists) from creating, and it’s frightening how good they are at this task.

But here’s a truth those whispers obscure: Nothing can occur if you don’t start writing.

There are two mantras that have always guided me:  1) A writer writes.  2) You have to waste a lot of creation on the way to achieving a great story.

The more you write, the better you hone your craft. If you let your insecurities stop you from writing, you’ll never get far enough into anything to be able to do something about those things you consider so cliché. As to that point about wasting creation…

On the road to finishing an award-winning first novel, I wrote eleven versions of the same book. I would write 500+ pages, then read something else published in the genre and say, “this has to be better” and scrap it and start over again with some new idea. I’m not saying everyone should spend that much time on one novel (it’s not very efficient) but I learned a lot about my craft. More to the point, I was writing the whole time.

To all aspiring authors, I plea: Let writing a novel be a learning experience. Let it be an adventure. Don’t think you have to land on THE IDEA from the first moment you start out—especially if you think you can’t even start writing unless you’ve achieved THE IDEA. There’s nothing like the thrill of watching a story assume its own momentum and pull out of your control; or of seeing characters appear out of nowhere and capture your heart. Don’t deny yourself these joys because you’re listening to the demons that say your story is cliché, or it has to be better. Make it better. Eliminate the clichés, but do it while you’re writing.

Keep in mind that every writer struggles with the tropes of their genre. You can’t avoid everything that’s cliché; some of the clichés are likely essential to making the genre what it is. Even so, sometimes it feels like pulling teeth trying to come up with things that are different and new. Other times inspiration strikes and the pages just flow out in a warm, delightful rush. But here’s the point: inspiration strikes far more often when you’re actively involved in creation.

Fledgling writers—especially fantasy writers—spend a lot of time sitting at their kitchen tables trying to come up with characters and kingdoms and languages ad nauseam. Listen, please don’t do this. Don’t spend all of your writing time planning and plotting, devising character descriptions or trying to piece together kingdoms, races and magical creatures (or romantic love triangles, or every type of fae in your series, or all the people your protagonist could possibly meet…).

Instead, start writing. Invent it when you need it.

Whaaaat? you say. No world map? No complicated plot chart? No characters beyond the main one or two I’ve been writing five clichéd chapters with over and over again? Whaaaaaat?

Here’s the thing: trying to think up creatures and characters and kingdoms ahead of the story is what is getting you into trouble, because you have no basis on which to ground your inventions. The characters, kingdoms and creatures are not organic to any world you’ve created, because you haven’t truly created the world yet, because you’re not even writing the story! So all you can do at that early stage is borrow ideas from someone else. Is it any wonder that you get five chapters in and think, “this is so cliché!”

Inspiration comes as you’re writing. It’s the payment the muse demands: that we first make an effort upon the sacred act of creation.

So start writing, and invent it when you need it.

How do you do this? Here’s an example: Your character is going into an inn and you ask yourself, who does he meet? What does he do there? Your next question has to be, what would be interesting? What would be entertaining? What would reveal more of my protagonist’s character and/or drive the plot forward? Let’s see…let’s have him meet a pirate (because who doesn’t love pirates, even if they’re cliché?). Now, where is the pirate from? Let’s make up an island. Okay, what shores does he pirate? Who are his enemies? Who does he trade with?

You make it all up right there. Now you’ve got all of that invented (just enough to finish the scene) and a whole new part of your world has come into focus organically. The best part is, it feels organic. It works, because that’s how real life works. You don’t go into a tavern knowing everything there is to know about the people in it. You don’t go through life that way. And neither should your characters—because when you’re writing with everything figured out to the nth power ahead of time, it often feels contrived, because it is.

So what do you need to know before you begin your novel? Just four things:

1) You need to establish your essential conflict. You need to know who your bad guys are, why they’re bad, what’s behind their motivations (at least in part), what they can do (what makes them powerful, scary or problematic) and why they’re in conflict with your protagonist(s). If you’re thinking you might write a series (kind of a must if you’re a fantasy writer) then you have to make sure your conflict is sufficiently encompassing so as to require three (or more) books to resolve.

3) [For genre writers] You need a clear concept of the essential elements as it applies to your genre. For fantasy, this is a solidly devised magic system. For SF, it’s the science to support your story. For mystery, it could be the pivotal points your protagonist follows in solving the case. For romance, it’s your love triangle or the person/thing keeping your lovers apart. For any of these, all you need to start with is a good premise. You’ll come to understand the magic or the science or the complexities of your mystery as your characters advance through the tale. So long as you have a sound premise, the rest will follow. And if it doesn’t? Well, you can go back and change the premise to fit what the story or world has developed into. You’re the god of your novel, after all.

4) You need a clear concept of the overarching purpose or theme which grounds the story and drives your passion to write it.

For example, in my fantasy novels, I wanted to explore a different kind of evil—the kind that is really only “evil” from a certain point of view. I wanted to show people that you can’t always pick one side and say “we’re right and you’re wrong.” So many conflicts in our world are conflicts of viewpoints (religions, doctrines, political outlooks). Right and wrong aren’t absolutes. They are assessments based on a gradient scale of survival, and what is survival for one group may not be survival for another.

This premise is where my dominating interest lies, and it’s something I’m very interested in, something I’m passionate about. That passion to explore philosophical ideals drives my work. I do it through fantasy because I love magic and sword fighting and castles and princes, and I love the freedom to invent anything I want, in any way I want it.

So to summarize all of this in three words: just start writing.

Have I missed any important points from your own experience? Do you think these points will be helpful in your writing? Share any comments with me below.